Home » The Future of Insuring against Disaster 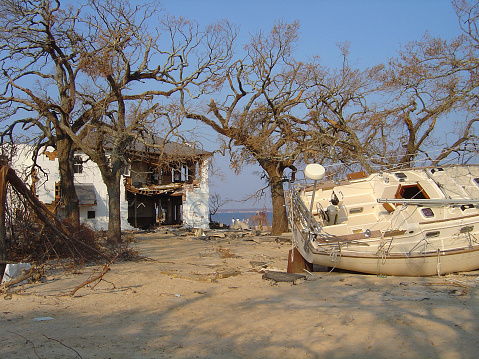 Hurricane Katrina Disaster with Sailboat Ashore and Demolished HMost companies aren’t insured for natural disaster and federal disaster relief is often too little and too late.

Even though the cost of natural disasters in 2017 was approximately $300 billion in the U.S., less than half — $130 billion — was insured, according to research by Swiss Re. The other $170 billion will be borne by taxpayers. What’s more, the cost of natural disasters has been increasing dramatically, quadrupling in the past decade, according to the U.S. Department of Commerce’s National Oceanic and Atmospheric Administration (NOAA).

The frequency, severity, and burden of bearing these losses are factors insurance leaders considered recently at the Insurance Information Institute’s 2018 Joint Insurance Forum in New York City. As reported by Insurance Journal, industry executives identified several trends that could change the risk landscape in the next few years.

The insurance industry needs to do more to take advantage of new technologies for assessing risk probabilities. Referring to Hurricane Harvey, Bill Churney, president of AIR Worldwide, said, “One of the things that I think the industry will have to come to grips with is this whole idea of the one-in-100-year flood zone FEMA (Federal Emergency Management Agency) map. It’s not a very good proxy for the risk, given that 40-50 percent of the loss in Harvey was outside of those areas.”

Churney pointed out that data collection and the technical expertise to use it for forecasting have become much more sophisticated. More insurers and risk managers need to incorporate these highly sophisticated resources into their risk modeling.

The Cost of Federal Aid Is Becoming Unsustainable

“If there’s any clear policy that’s coming out of Washington holistically, I would call it a reallocation of burden,” said Alex Kaplan, head of North America at Swiss Re Global Partnerships. “We are finally beginning to come to a point where the federal government is going to say, ‘You know what? This is not financially sustainable. We are not going to continue to provide bailouts to communities that are otherwise making bad decisions about land use, planning or building codes. You have to own your risk.”

Federal Disaster Relief Is Often Too late, Too Little

The other problem with federal disaster relief is that it’s slow, and its payouts are relatively small. It took Congress three months to pass supplemental relief for Hurricane Sandy and even one year after the disaster, only 25 percent of the funds had been dispersed. Most people don’t know that the largest check FEMA will write is $33,000.

If federal disaster relief is often too little too late, most people don’t realize it. Even businesses and public entities expect to get bailed out by the government. “I’ve known risk managers of public entities across the United States that always say, ‘Why would I pay for something I know I’m going to get for free?’ So, there’s this perception that the federal government is going to come and save the day,” said Kaplan.

The Public Needs to Be Better Informed

Attendees noted that the political climate is changing. More government entities are focusing on “the cost of risk and how to engage the private sector to shift more of the burden off of the back of taxpayers onto the balance sheet of the private market.”

Greater reliance on private insurance is part of the solution. But there is also more focus on mitigation. For example, federal subsidies should be reduced or eliminated for insuring properties in flood zones or where the lack of loss mitigation features make damage from flooding, wildfire, tornadoes, hurricanes and earthquakes more severe. The private market can price these risks more accurately.

“Hopefully, 2018 will be the year when the switch flips, and people start seeing that mitigation is an investment; it’s not an expense. Because that’s how we will change the culture of this country so that it is one of preparedness instead of just continued response and recovery,” said Julie Rochman, president and CEO at the Insurance Institute for Business & Home Safety (IBHS).

Latest News/Insights IRS Releases 2021 HSA Contribution Limits and HDHP Deductible and Out-of-Pocket Limits May 28, 2020 In Rev. Proc. 2020-32, the IRS released the inflation adjusted amounts for 2020 relevant to HSAs and high deductible health plans (HDHPs).  The table below summarizes those adjustments and other Read More »
Next Event 10 June Affordable Care Act Update: What’s New with the ACA? 9:00 am PDT In this informative webinar Stacy H. Barrow, Esq., BAN’s Director of Compliance, discusses the current state of the Affordable Care Act, including top compliance issues in 2020, new legal and re Register »
Top
Ask a Recruiter